Last week, UD hosted the second Industry Takeover Seminar of the season at their new home, Talent House, in east London. The seminar took a closer look at copyright and revenue streams and was hosted by Chris Cooke, founder of CMU. He was joined on the panel by Davina Merchant (A&R Manager), Lara Baker (Business Development Director, SongTrust), Shauni Caballero (Founder, The Go 2 Agency) and Terence Daniel (Relationship Manager at PPL). Tiffany Lai reports back…

As I sat down at the Industry Takeover seminar I was immediately drawn into conversation with some friendly guests:

“These talks are really useful because it’s hard to get information otherwise. A lot of the online stuff on copyright is US focussed and there’s not much out there on European and British laws” said David, an Amapiano producer.

“Exactly. And even if there are, if the video is from two years ago, it’s already too old because it’s pre-reels” – a music manager to my right chimed in.

As I looked around, I saw that the audience had a wide age range, from those who had been in the music industry for a while to younger rappers and producers who were trying to get a basic understanding of how to make money from their releases.

As the lights dimmed, our host Chris Cooke introduced himself. Chris is a journalist, lecturer and founder of CMU (Complete Music Update) a company that aims to help people understand the inner workings of the music business. It’s hard to find someone who is both deeply familiar with copyright fine print and a charismatic communicator but UD were in luck!

As Chris walked us through the basics of music rights, members of the audience sat up and a few could be seen taking notes as Chris answered key questions such as:

If you’re equally curious about these questions you can check out Chris’ guide to music copyright here. 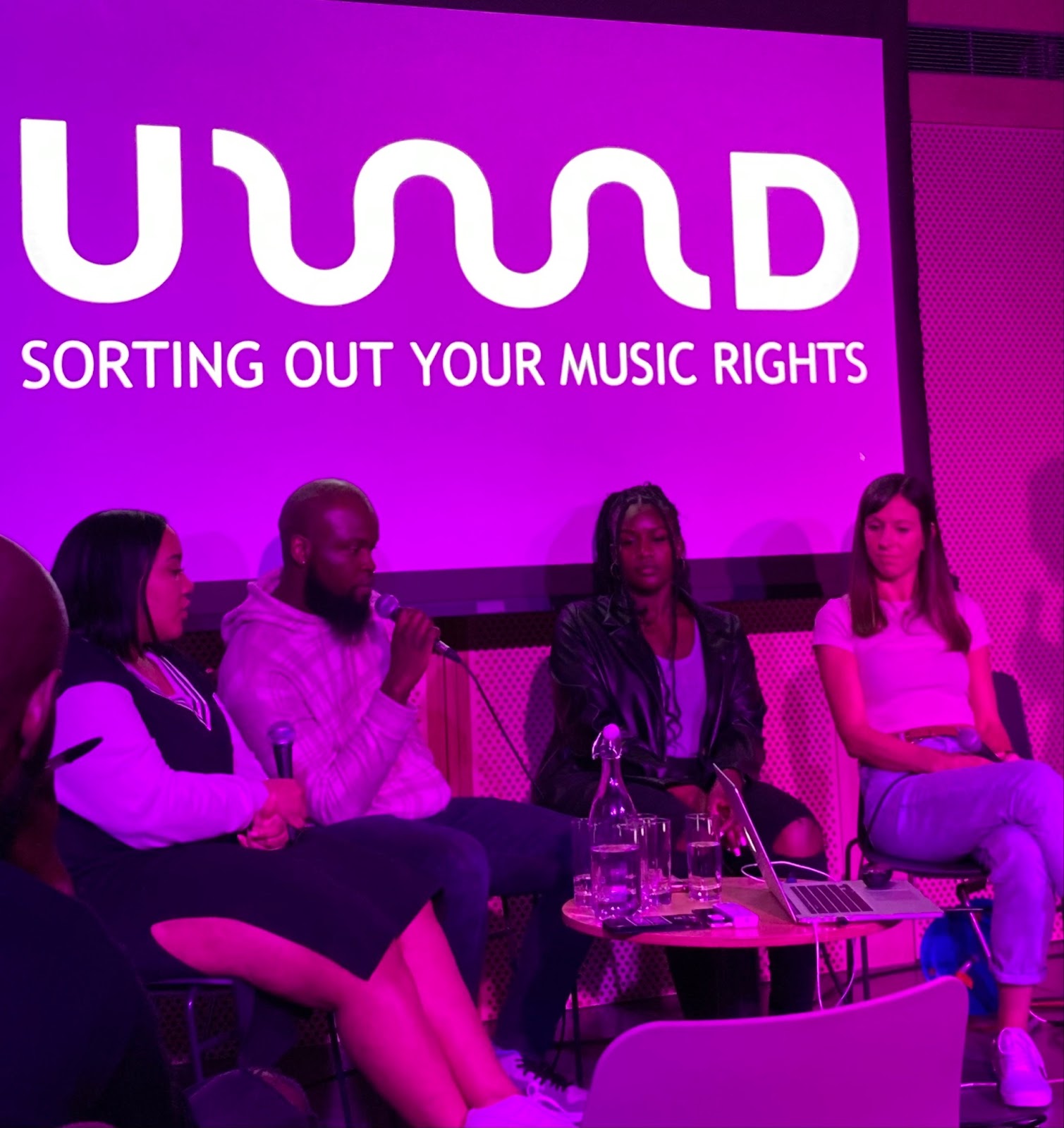 We then moved onto the panel talk on copyright, the differences between collecting societies, radio plays and how each of our guests got to where they are today.

Davina Merchant, who started as a music journalist and is now an A&R manager at Downtown Music Services, talked us through sync deals and why they’re so key to an artist’s success.

Lara Baker who founded the AIM awards and is now a registration wiz and director at Songtrust, stressed the importance of filling out collecting society forms correctly in order to get paid: “if you don’t fill out the forms, then you can’t get paid. Then all your revenue goes to Drake and Ed Sheeran.”

Shauni Caballero who left school in year 10 and is now a legend in the royalties game founded her own consultancy in 2017 called the Go 2 Agency after becoming the ‘go-to’ girl when it came to publishing and royalties. She and the rest of panel had this to say about splits (ie. how royalties are divided up between collaborators): “Agree your splits either before or in the studio, even if it kills the vibe, because once that track is published and making money, everyone’s going to have a different idea of how much they’re owed”.

If you want to keep things simple, Songtrust has a split sheet template on their site. 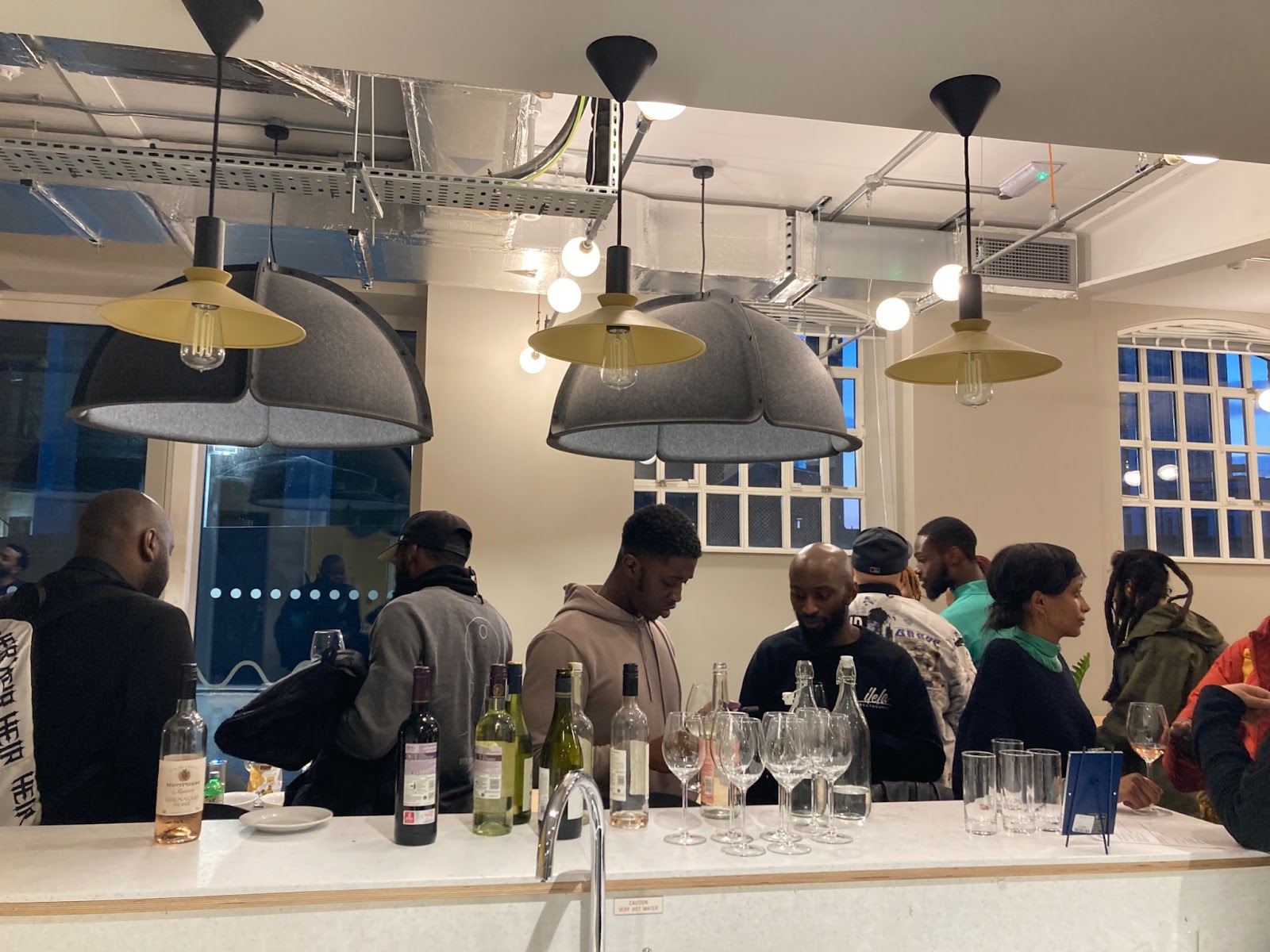 After a quick but technical Q&A everyone headed over for networking and drinks in the Member’s Hub. Here I had a quick chat with some guests about their thoughts and main takeaways.

Anna, who’s trying to get into web design content within the music industry, was surprised by how interesting the talk was given that she’d previously assumed it was a dry topic. She told me: “[The process] is simpler than I expected, as long as you sign up to the right agencies at the beginning then you’re in a good place.”

I also caught up with singer/songwriter Nola, who asked whether songwriters commonly got publishing deals (a resounding yes! from the panel). Though she admitted she was still trying “to get her head around PPL, it was great to have a seminar break it down so much”. The other guests I talked to seemed equally pleased with the explanation of what previously seemed like a tough and complex system.

If you want to expand your knowledge, the next Industry Takeover Seminar The Deal: The Route to Market And How It’s Changed, takes place at Talent House, Thursday 26th May. Tickets are on sale now.

Words & photos by Tiffany Lai. Listen to Seasonal Expression on the 4th Sunday of every month, 10-11pm on voicesradio.co.uk @tiffany.l2

The Great Escape, a four day festival escapade on the Southern coast with over 500 artists performing across 30 venues. Having already reported from the UD stage, in Part 2 of her coverage, Elsa Monteith gives us the low down on the best of the rest…

In the third of our Industry Takeover Seminar series, we’ve got another all-star line-up ready to grace the Talent House and share their knowledge. In The Deal: The Route to Market – And How It’s Changed, DIY or sign with a label? We investigate the landscape with Callum Hay (Head of Label Services, Ditto), TK (CEO, Manager & Label owner, Finesse Foreva) and Timothy Youdeowei (Music Strategy, The Orchard)…

A sunny Saturday on the coast brought a hotly anticipated lineup of up-and-coming artists to The Great Escape festival. Elsa Monteith reports back from her hometown of Brighton…

Maria Hanlon breaks down our love for Kokoroko, an eight-piece band changing preconceptions of jazz and bringing fresh soundscapes to a festival near you this summer. And we’re here for it…

We use cookies to give you the best experience on our website. We would like your consent to collect anonymous data to study how people use our site.

This website uses cookies so that we can provide you with the best user experience possible. Cookie information is stored in your browser and performs functions such as recognising you when you return to our website and helping our team to understand which sections of the website you find most interesting and useful.

Strictly Necessary Cookie should be enabled at all times so that we can save your preferences for cookie settings.

If you disable this cookie, we will not be able to save your preferences. This means that every time you visit this website you will need to enable or disable cookies again.

This website uses Google Analytics to collect anonymous information such as the number of visitors to the site, and the most popular pages.

Please enable Strictly Necessary Cookies first so that we can save your preferences!